Costa Rica is an exiting place to explore by bike. You can find active vulcano's, coffee/banana plantations, tropical forest and good waves for surfing. Since Costa Rica has a relative high standard of living compared with the surrounding countries it considered being quite safe. The people are very friendly for cyclists and wild camping is very good possible. Below the story of our 3 week cycling trip in Costa Rica 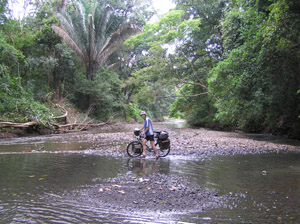 At first we tried to go to Chili, but this didnt succeed ticket it was too costly to fly in the bikes due Iberia which charges per kilo over weight. Looking on the world map we found out that Central America was also a blank spot for us. Costa Rica pretended to be relative safe and also the place to be for nature lovers. So in this way we ended up with a ticket to Costa Rica.

24 November we departed from Amsterdam Schiphol airport. The bikes where boxed in the usual way; remove paddles; deflate tires; remove front wheel and protect derailleur. A defect to an aircraft navigational instrument resulted in a longer flight time. It was not allowed to cross the ocean; we had to fly along the coastline of north America via the north pole above Iceland. We flew during the day so when the aircraft entered the polar region you could see becoming dark and becoming light again, very cool to experience. 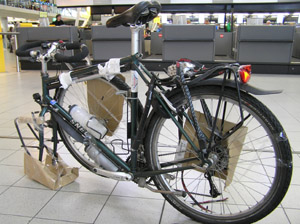 At San Jose we found a place for the bike boxes in the parking garage next to the arrival exit. The security people told us its possible to leave them under a concrete fly over in the garage. Looks like a dry and fine place, lets see if they are still there after 3 weeks. The guy of the garage was so nice to advise us not to cycle to the city center for safety reasons in darkness. The taxi was only 5 dollar and took us with the bikes to a hotel in Alajuela.

In Alajuela we stayed one day and tried to gather information about the recent red alert situation and the current situation. But the local people didnt know much and where not really impressed by what happened a couple of weeks ago. Road conditions should be ok they said. So it was a good decision just to go and see. 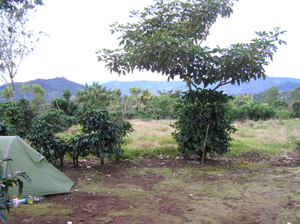 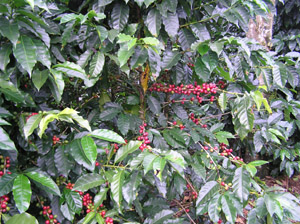 The first cycling day was quite heavy we where not yet adapted to the humidity and high temperature, also the hills made us sweat allot. After 30km it was enough that day we found a wild camping spot hiding in a coffee plantation looking out over a valley. The next days we adapted slowly to the local conditions. 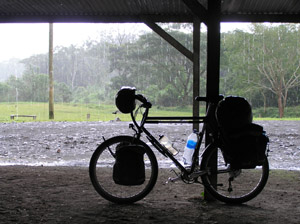 Our first target was the Arenal volcano. This is an active vulcano giving small eruptions, which are visible at night. In La Fortuna we couldn't see this because of the clouds. Cycling around Arenal didn't help also clouds therefore we decided to continue on the south side of the Arenal lake with our trip. This track was a doted line on the map so looks very interesting, but after a few kilometer we encountered a river (Rio Negro). Normally we can pass the small rivers but this on had a too strong current (white water) and >1 meter deep. So we talked with the local people they said it is only possible with a horse or with an Unimog. After taking pictures we had to turn around too dangerous. Later on we read in the Lonely Planet that this was only possible at the end of the dry season round may. 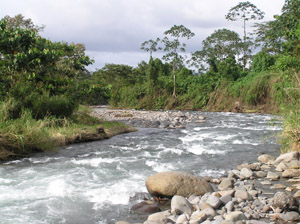 At the way back to the main road we made our camp 3-km from the vulcano crater near a stream, with some luck we could see the lava coming out at night. Sunset is quite early in Costa Rica about 17:15 in November, so it is recommended to leave the road before that time and find a place to sleep. At 18:15 in complete darkness we where cooking with our petrol stove, someone come to us with a torch in his hand. Oeps policeor park ranger 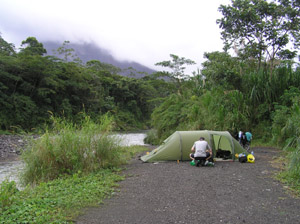 It was a vulcano guide coming to see the lava as well. He gave use some advises about the snake that could be around our tent. There could be rattle snake; boa and bushmaster, keep the tent door closed when you walk away from it and make some noise. We asked him how he found us. He said:"I saw some light of your stove when I passed the bridge 300m away from your nice camping spot. You found the best place to view the vulcano. I come here twice every day". After the visitor we could continue with our dinner soup and pasta with sardines.

The next day we cycle around the Lake Arenal which has been enlarge by a hydroelectric project. At the noth side of the lake there was allot of wind it felt like a storm (±7 Bft). Near by Tileràn the weather changed from rainy to less clouded. On the Caribbean side of Costa Rica the weather is less stable compared with the pacific side that we now entered. From this moment we hardly got any rain the rest of the holiday. 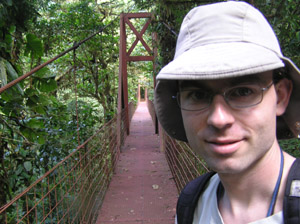 The road to Monteverde was quite steep. It looks like that the mountain dirt roads in Costa Rica doesn't know hair pins, most of the roads go straight up the mountain. This resulted in a 40 km clime with steep sections. Later this holiday we learned that it can go much steeper but for this day we where happy to reach Monteverde. Monteverde is the centre for eco-tourism they say. The small town is located in a cloud forest. Companies try to get the tourist in to there canopy tour to spot birds and other animals. We choose to do a day walk in the Bosque Nubuso to spot birds in this way. After one afternoon walking we came to the conclusion that we see more birds and other animals while biking than over here by foot. The only bird we saw was a silhouette of a quetzal seemed to be quite rare.

From the mountains of Monteverde we descended 1300m down to the coast of the Gulf of Nicoya. Here we experienced more poor people making a life of fishing. The way people looked at us gave us the feelings that not allot tourist come here by bike. At first we wanted to camp on the beach but we got too much attention and choose to camp out of sight some where in a cattle field near Finca Cobano (Colorado). 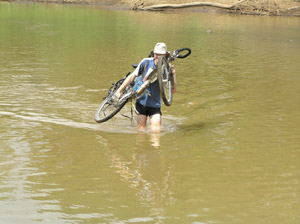 A real high light of the trip was cycling on Nicoya Peninsula. From Nicoya City we cycled to Santa Cruz and the Pacific Ocean. The roads are not so busy over here and you can find nice places to wild camp on the beach. The landscape is tropical here you can find different types of moneys in the trees. The peninsula is not flat at all, it undulates with about 100 meter some parts are really steep. The coastal road from Marbella, Samara, Manzanillo is quite rough we have to cross about 10 rivers some 75 cm deep. This is really fun fording the rivers were others have to turn with the car we could go on. One river crossing was more than 100m because the road continued up stream. The roads near Cabo Blanco are really steep here we even had to push the bikes this let us think about how the Australian people call a bicycle: "push bike". In Naranjo we took the ferry (±2 euro) to Puntarenas from there we cycled slowly back to the starting point Alajueal. 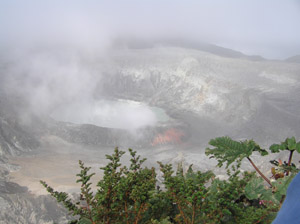 Since we had one day spare we decided to go for a day trip to the top of the Poas vulcano without luggage on the bikes. After three weeks cycling/training the clime to the 2577m viewpoint to the Poas crater was quite easy. On top there were quite some clouds so at first the crater was not visible. At the top we experienced the lowest temperature in our holiday, 16°C. Normally it was more than 24°C the last two weeks. After a quarter of a hour waiting the crater showed up for some seconds. The smell of rotten eggs reminded me of the smell in Iceland last summer.

At the San Jose airport we where very lucky that our bike boxes where still there. The people of the car parking where friendly to watch them during the 3 weeks of our trip.

Costa Rica is a fantastic place to explore!

More about the 928 km trip through Costa Rica