One of my favorite countries 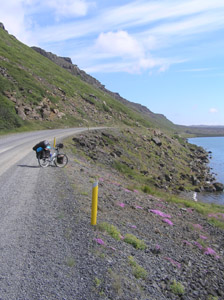 After six years I went back to Iceland, because it is one of my favorites till now. I wanted to see more of this bubbling and steaming island. The pure nature combined with desolation makes cycling in Iceland a very impressive experience. The previous trip was mainly in the south part, from Snaefellness Peninsula, Landmannalaugar to Skaftafel near the big glacier Vatnajokull. This trip the main goal was to explore the highlands, preferably the Kjölur and the Sprengisandur routes. 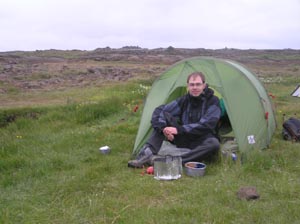 Since this was a solo tour I had some concerns about the road conditions and the amount of food I could carry on my bike. The other concern was the two deep rivers in the middle of Sprengisandur. To get more feeling for cycling in the highlands I choose to start with the Kjolur route since it is fully bridged. After arriving at the airport Keflavik, I stayed one night at the Alex camp ground 3 km from the airport. The next days the weather was very good 20°C. The route along the south coast to Sellfoss is quite nice as a starter. The road is a mixture between gravel and asphalt so good to test your equipment. In Sellfoss there is a quite big supermarket for Icelandic standards, so a good place to stock up food for the Kjolur route since there are no shops in the highland. I bought food for 5 days food, to cycle from Sellfoss, Geysir, Kjölur to Varmalid. 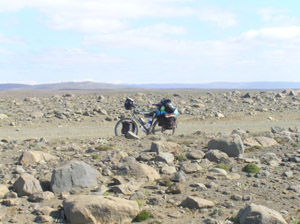 The Kjölur (F35) is a highland road (166km). It is the second longest of the roads through the Highlands. The route takes about 3 to 4 days by bicycle depending on weather conditions. It begins in the south of Iceland behind the Gullfoss waterfall, and it ends in the north near Blönduós on the number one highway. The road traverses the interior between two glaciers, Langjökull and Hofsjökull. The highest altitude is about 700 meter. Not that high but you have to remind that this area has is a sub-polar climate. To compare with the Alps you have to add about 3000m to the altitude. The track was probably known since the first times of Icelandic settlements. Often outlaws where send to this place. On the West Side of the current road the original route is situated the old Kjalvegur, which is still in use for trekking. Piles of stones mark the old route through the highland desert. After some people had perished in a snowstorm by the end of the 18th century, the Kjölur road was forgotten for about 100 years. It was rediscovered in the 19th century. Today, tourists use the Kjolur route frequently, since it does not require the use of a four-wheel-drive vehicle and no rivers have to be forded. All mayor rivers are bridged. So, very suitable for the bicycle. 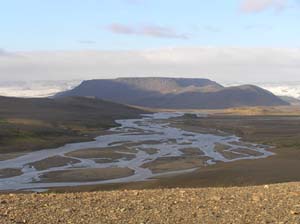 The road from Sellfoss to Geysir is quite busy with cars, but after you pass the Gullfoss waterfall it is quite. Here adventure begins. Rocky plains, spectacular views on the Langjökull and its Glacier Lake. This part of the route I had the feeling of dreaming on this desolated stone desert. The wind was in the back and it was sunny so relatively easy conditions. The southern part of the Kjulor route the road was bumpy. First, I cycled to the Kerlingarfjöll, a beautiful volcanic mountain range, which is situated to the 10 km east of the Kjölur road. An old skiing area, which has a natural hot spring within 20min walk from the campside. The ride from the Kjolur to Kerlingarfjöll is quite steep and one river must be forded. At the time I arrived there eight in the evening the 112-rescue wagon gave me a hitch across the river. After eating my dinner I wend to the hot spring. Strange to be here alone in half darkness at midnight, but 30°C was not hot enough to stay long in the pool. The next day I continued to Hveravellir half way Kjölur route. 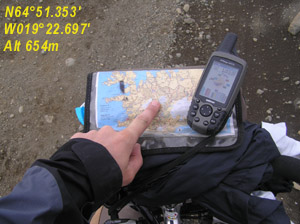 At Hveravellir you can camp on an official campside and meet other people (some also by bike). Here I met some Germans and Spanish people on bikes. The campsite has also a natural hot spring. Will this be the cleanest holiday ever? The next day I was lucky again. I was cycling sort of in a group in the same direction. We had the wind in the back. The first part north of Hveravellir was quite bumpy again but later on the track was much smoother. Sometimes down hill you could go 40km/h. The guys from the Spanish/Italian group wend faster down hill but later on the noticed that one of there carbon frames broke due to the heavy shock the bike had to sustain. That day I met also two Belgium women. They where cycling in the other direction. When we met they start to complain, that during their stay at Iceland the wind was every day in their face for 3 weeks. That day I cycled 118km with wind in the back, I was quite lucky. Cycling on the number 1 was not so interesting. The good thing was that shops where around to by fresh veggie's and Skyr (kind of thick yogurt) again. The weather was also less over here the wind was from the north which brought me some rainy days. In the second biggest city of Iceland Akureyri with about 16.000 people I prepared for the next part of the trip, the Sprengisandur route. 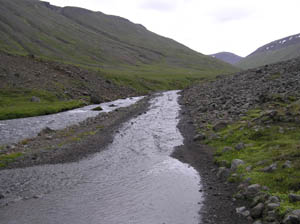 After the Kjölur route I build up some experience for the rougher Spengisandur. By talking with other solo cyclists from the UK and Germany I got some up to date information about the road condition. It is really do-able at the moment they said. Take a stick you the UK guy said to check the depth of the dusty rivers. The German guy from Berlin advised me to take F821 track (the south of Akureyri) and not start at Godafoss with the F842, because than you miss the Laugafell hot spring area. This was really a good idea.
BR> The Sprengisandur route (F26) is also a highland route the longest of Iceland (±200 km). It starts at Godafoss and ends 23km north of Landmannalaugar. Sprengisandur means explosion sand plane and from ancient times people believe that traveler must pass this area as fast as possible. Also you need to take care when cycling in this area. I took food for 8 days to complete this route from Akureyri to Kirkjubæjarklaustur. Especially for this part of my trip I took extra tools with me to repair my bike if needed. The altitude of the F26 varies between 500 and 910 meter. And the weather can be harsh over here, expect strong winds. I experienced that my long plastic 18 cm long pegs for the tent where not good enough, never the less I managed with some extra stones on it. 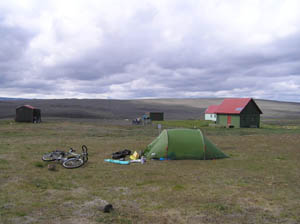 The route from Akureyri to Laugafell was very nice. The track crosses 8 rivers, some times the river is the track (see picture). After 60 km there is a very steep section. After that clime your at 910 meter in the middle of a moon like landscape. The whole day rain and wind but on the moon it was dry and the where no sounds. Wonderful! Due my late start that day I arrived at 23:00 in Laugafell on the campsite. After building the tent I went too the hotpot to warm my self a bit. Laugafell campsite is not that crowed as Hveravellir (4 Icelandic, 15 Russian, 3 American, one Dutch). While I was in the pool more people came in and it became very nice. The Icelandic lady brought some wine other came with beer and we sit in the pool till four o'clock in the night. At four o'clock my finger tips told me that I was clean enough to cook my dinner before to go to bed.


More about the 1200 km trip through Iceland