When you like walking, I recommand walking over the public footpaths, this way you can come at places where you can't come by bike. We walked over a public foot path near Mevagissey and the views were really fantastic, watch the picture of it below.

Coastline near the Dodman Point 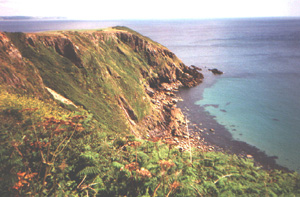 Coastline near the Dodman Point

Land's End is the most South/West part of the UK and is very touristic by the the coastline is very nice, in one day you can see the whole coastline from ST Ives to Penzance.